i blame it on the hormones...

As Boogie is moving through his 3rd month of life, it's been neat to see his little personality emerging.  It's been making me think about and wonder who he's going to be.  What traits and habits will he get from me, which ones will he get from J? Then, yesterday evening, as I was on my way to work (having another emotional breakdown about leaving my darling baby at home), I heard this song for the first time....

As you can image, this didn't help with the waterworks! I know things won't be perfect, we'll have our bumps and he'll we'll make mistakes, but I just hope we can raise him to be happy, to appreciate the world around him and to love and accept people for who they are. And if he's anything like his daddy, then he's going to be a pretty great man. 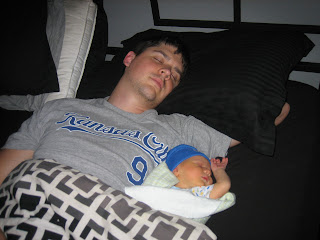 Yes, motherhood has turned me into a sappy, mushy mess who cries as much as the baby....I blame it on the hormones...
Posted by courtney at 10:36 AM