I knew it was going to happen sooner or later, we've just been so blessed that Boogie has been healthy and happy for 9+months. But, the time has come....Boogie is officially a sick little monkey :(  He's had an occasional runny nose, but never really been "sick."  He now has a full blown, thick snot, watery eyes, grouchy pants, can't sleep cold. My poor little Boogie Snot...


It started yesterday with a runny nose.  I thought maybe it was just the crazy weather ups and downs and it would pass. But, last night I got the proof that he's truly not feeling good:


We had a very rough day today.  He fussed and fussed and wanted to be held all day long.  He fought and fought his naps, even though he could barely keep his eyes open.  We used the nose spray and snot sucker I don't even know how many times!
I gave him a little Tylenol with his bedtime bottle and he's now been quietly sleeping for about 30 minutes.  Hopefully he'll make it through the night.  We BOTH need some peace and quiet and a little sleep....oh yea, I forgot to mention...I've had a killer sinus headache and fever all day long.....it's been quite the day at our house!
Here's my sweet little Boogie Snot.....tears and snot and all.  Feel better little man!!! 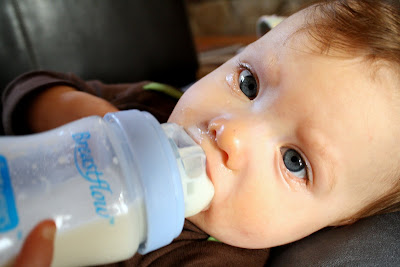 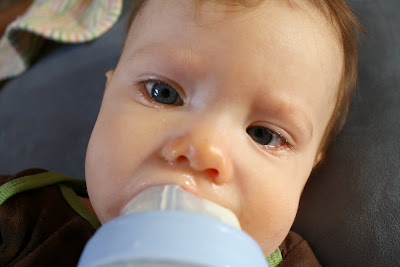