Where did August go?! I swear this year and thus, this pregnancy, are FLYING by!! I feel like we've been really busy these last few weeks, but looking back I'm not really sure what we were so busy doing?! I guess it's time to play catch up.

The Bathroom Project: Still a work in progress, BUT very, very close to completion!! No more tile saw or big tools necessary. Just some grout, caulk, paint and door installation! We WILL finish this weekend! And then I'll share all the before and afters :)

The Nursery: Well, deductive reasoning would conclude that since the bathroom isn't done...the nursery isn't started. Sadly, true statement.  The big furniture is out of the office, but there's still other various furniture pieces, boxes of junk, half of J's suits and all my shoes that still need to find a home somewhere else in this little house! I'm close to having everything I need to put her room together and have started a lot of the craft/art projects.  I just need J to help me get that room cleaned out and walls painted so I can get it all put together!! Once it's cleared out, it shouldn't take more than a week to get it completed!

Pumpkin: For the most part, this pregnancy has been a breeze (knocking on wood as I type).  She's measuring right on track and consistently has a strong heart beat in the 140s.  So she's healthy and happy in there...momma on the other hand has had some issues...I'm anemic.  Always have been.  It comes and goes since I was a teenager, call it bad genes (thanks mom!). With both of my pregnancies it's been an issue as my hemoglobin levels drop significantly during pregnancy.  With Boogie, we were able to keep it stable with regular iron supplements.  This time....not so much... When they did my blood work during my OGTT, they found my hemoglobin levels at about 8.4 (gee, is this sounding familiar?).  So, like with Boogie, we bumped up the iron. A month later, we rechecked and found that, this time, the iron wasn't holding my levels steady and my hemoglobin had dropped even lower...ugh!! We did tons blood work to make sure there wasn't some other genetic clotting disorder that could be causing my levels to fall (all came back normal!!) So, now I'm on prescription level iron supplements.  It's been 3 days and I'm actually feeling the difference (maybe it's just wishful thinking...). We'll recheck my hemoglobin in a couple weeks and see....

Boogie: 14 months old today!! Can't believe it!! He's become such a big boy over the last couple of months. He's definitely a professional walker now. No more funny looking baby waddle, he's walking better than mommy right now! :)  He doesn't have any new words, but he's definitely understanding much more. He can follow simple directions and knows his routines. He picks up new signs in just a day.  He's mommy's little helper and will put his toys away and pick up his messes when asked (especially if it's to clean up so he can eat!) It's like he's actually becoming a fully functioning member of society! He recently got his second hair cut, a real live big boy hair cut this time: He's getting 4 new teeth, yes, 4!! The top 4 front teeth. Unfortunately, the outer two are coming in faster then the front two so soon we'll have a little vampire on ours hands.  He's a champ and has been dealing really well with the pain.  He's had his grouchy moments and is always poking at his gums with his tongue and fingers, but over all you wouldn't know he's teething.  Eating has become a new experience with these emerging teeth, it's like he's not sure what to do with them... 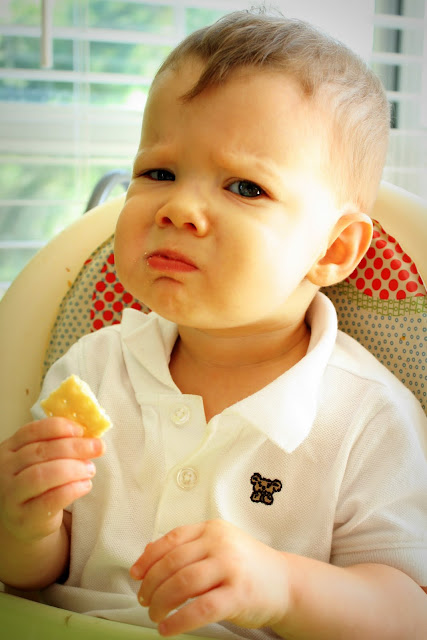 His new favorite playmate is Sophie, our Westie.  He gets so excited when you ask if he wants to go downstairs and play with her. "Dog?! Dog?!" while pointing downstairs....He squeals with delight when he sees her and throws his hands out to hug her.  He snuggles on her and kisses her.  He loves to throw the ball for her to chase and laughs hysterically when she goes running after it or when they play tug with her stuffed animal. This video is just a small sample of our days playing with Sophie...it also shows off his walking skills a little bit: