Yes, it's been almost a month since my last post. I've been 'busy.'  Our trip to New Zealand (pics to come in a photo-blog post) took up much of March.  It's been almost a week and a half since we returned, but I still feel discombobulated (first time I've ever used that word, but it's the only word that truly describes how I feel).  I've had a hard time getting back to reality;  I can't figure out which way is up.  Apparently, spending a week upside down on the other side of the world really messes with your head! But, I think I finally feel like I can at least make complete sentences....

Last week was Boogie's 9 month appointment and it didn't go so well.  He's still a little munch-kin at 17lbs4oz (7%) and 27in(14%).  The doctor wasn't worried at all about his size.  He said after six months it's genetics that start to kick in, so....he's just a little squirt like his momma! Unfortunately, he's just like his momma in another way...we found out that Boogie is extremely anemic. His hemoglobin levels were at 8.8 (normal range is 11-16). His doctor seemed pretty concerned and actually upset because it's something that should have been caught at his first exam in the hospital (a different doctor from a different practice rounded on him in the hospital) which upset me even more as well. And, of course, the one time we get 'bad' news is the one appointment that J couldn't be at and I had to go through by myself.  I know it's nothing we did wrong, it's just genetics, but it made me cry and feel helpless; like I was a bad mommy or something. Treatment for now is 2 servings of meat/day and 2 doses of iron drops/day.  We'll check his levels again at his 12 month appointment.   Other than being a little squirt and having his mommy's blood, the doctor was really impressed with his development (his crawling, standing, cruising, talking, talking and talking, sleeping habits and eye tracking). 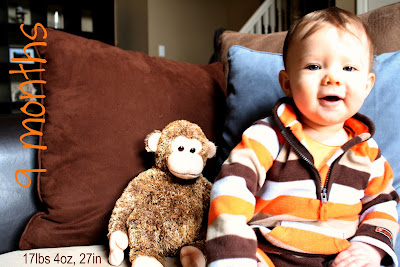