Ever since our ultrasound at 18 weeks, I've been paranoid that the tech was wrong.  Those of you who know me well, know that I'm a high anxiety, worry-wart about everything anyway, but knowing the correct sex of your soon-arriving child seems like important information that even a normal person would worry about!

At the time, getting to meet our little princess (or maybe prince?) at 18 weeks instead of the usual 20 weeks seemed great! But, now it just makes me worried that it was too early to really know for sure! Plus, the sonographer didn't spend more than 30 seconds checking out 'the goods.' She snapped a quick, so-so picture, said "it's a girl" and moved on, never coming back 'just to make sure.'  Check out the picture for yourself. I'm no sonographer, but I do see the standard 3-lines indicating girl....... 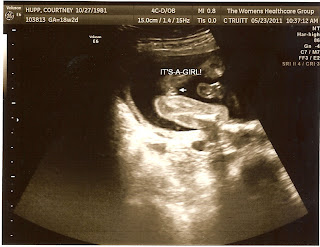 Still, I don't think it's the greatest picture ever.....

I love to participate in a few pregnancy message boards; you know, chat with the ladies who are going through the same thing at the same time. Problem is: sometimes it stirs up my worry-wart tendencies!! Two different ladies now have been told one sex at their 20 week u/s, only to be told the complete opposite at a later u/s!! One lady had an almost identical '3-lines' picture at her 20 week u/s, then at 27 week u/s had a 100%, no doubt about it boy parts picture!! aaaahhh!!!!

As soon as I read that story and saw her pictures, I got on the phone and scheduled our 3D u/s!! I'm not going to rely on a so-so picture and 30 second guess! So on July 28th we get to see our little princess....or maybe prince??
Posted by courtney at 9:06 PM