If you haven't heard, Boogie has some news to share.... 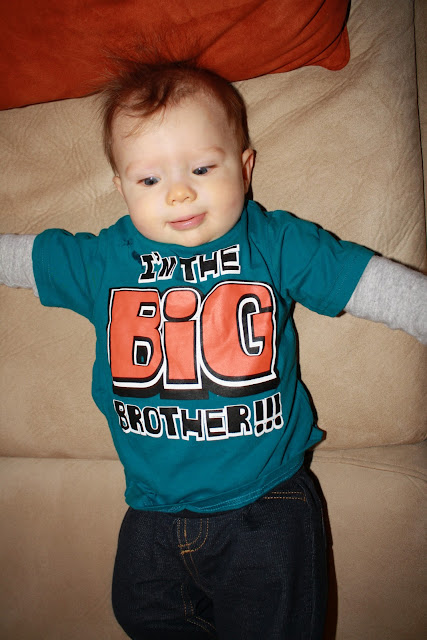 Yep! He's going to be a big brother! Version 2.0 is due this October! This family is joining in on the baby boom of 2011 :)
Below is a recap of our journey so far:

2/16:  As with Boogie, we're keeping this a family secret for a little bit. We got our BFP on Friday, 2/11.  It came as a little bit of a shock.  We had said when we got pregnant with Boogie that we wanted to have our kids close together. Well, we got our wish! The kiddos will about about 16 months apart; talk about 2 under 2!! We were planning to have a few more months, but God has his own plans :)
Most of the initial shock has worn off and now we couldn't be more excited! As of right now (2/16), we still don't have a due date!  As you know, I am still BF Boogie and thus Aunt Flow never came back for a visit, which is nice, but makes determining conception a little tricky. We had our first appointment today.  Our CNM said my uterus seemed to be measuring about 5 weeks and thus thought it was a little early for an u/s.  It is scheduled for 3/2.  I guess it's good that we're keeping this little nugget a secret for now because it would be awkward to answer the question "when are you due" with "oh, I don't know...."

3/2: We had our u/s today and finally have a due date! Looks like Version 2.0 will make it's debut around October 22nd....just before my 30th birthday! It was weird to see such a small little nugget.  We didn't get to see Boogie until we were 20 weeks along so this time was much different!

3/30: We had our third appointment today and finally got to hear the heart beat.  We saw the little flicker on the u/s last time, but there's still something special about hearing that "wah wah wah wah" for the first time :) We were going to wait until the end of the first trimester to let the secret out, but we don't go back to the doctor for 5 more weeks and it might be a little hard to hide at that point! So, we started telling our family tonight :)

4/1: All of our parents & grandparents have been told so now it's time to make it 'facebook official!' It's funny how this makes it all real now.  J said the other night after telling our parents "so, I guess you're really pregnant now, huh?" ha!!
Posted by courtney at 2:11 PM